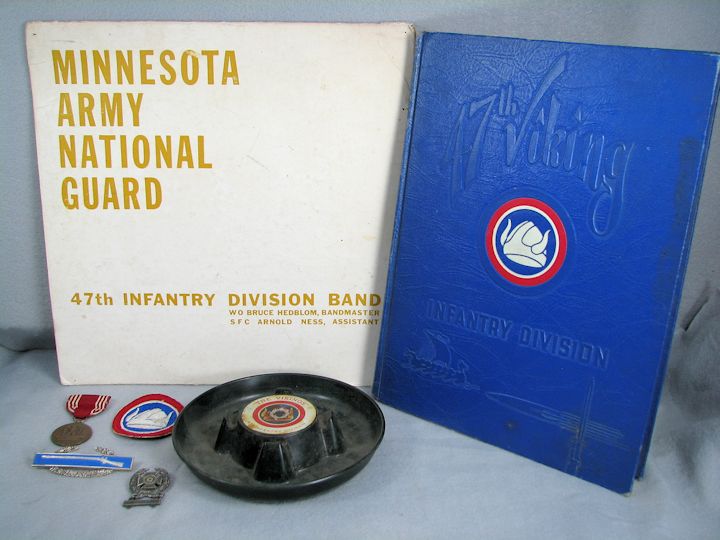 Click the small images to enlarge
GROUPING, 47th INFANTRY DIVISION, MINNESOTA ARMY NATIONAL GUARD. "THE VIKINGS".  CAMP RUCKER, ALABAMA, 1951:
There is a LP record of the Minnesota Army National Guard.  It is dirty and not played, but I did not notice any damage to it so it should play OK.  There is the History Book from 1951 about the 47th Infantry Division.  It has some cover issues but the inside looks ok.  There is some foxing on some pages.  I did not notice any tears etc. but I did not look at each page.  There is a plastic ash tray with the Viking crest in the center.  It is well used, dirty and has burned areas.  A Viking sleeve patch.  An unnamed Good Conduct Medal with early small ribbon and slotted broach.  A Combat infantry Badge marked STERLING.  Pictured without the clasp nuts but it will come with them.  An Expert Qualification Badge with Rifle Bar.  Both pieces hallmarked and also marked STERLING.  There is more information in text on the photos; take a look!

PLANKOWNER'S GROUPING, USS CHICAGO, CG-11:  This Heavy Cruiser was launched in 1944 during WW2 and was converted to a Guided Missle Cruiser launched in 1964 during the Vietnam War.  Everything pictured:  Nice large cloth patch; Plankowner plaque with nice large metal plate and Id'd to a LTJG; 8 X 10 photo; sword belt; 3 booklets; 2 hat covers; 2 pair gloves; 3 unknown cloth belts; 9 buttons; 4 sets of Ensign insignia; 6 Ensign shoulder boards and an Officer's hat chin strap.  See the photos for more detailed descriptions of what this grouping contains.  A history of the USS Chicago, CG-11 can be found on the Internet.  (Search CG-11).
Item # 617JJ  $35.00 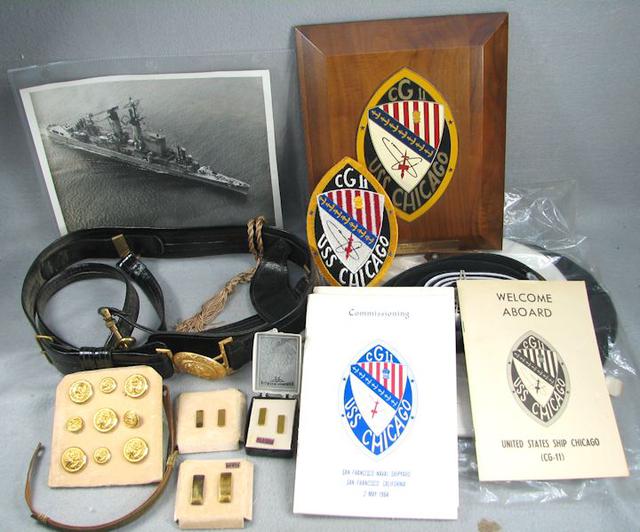 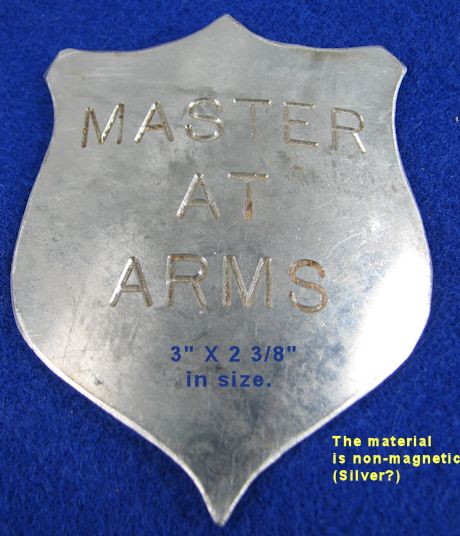 Click small images to enlarge --->
WW2, USS DENVER:  The USS Denver was a light cruiser (CL-58) and she had many battles in the Pacific.  This small grouping is from 1944-1945 when the Denver was in the Philippines.  This group consist of a print of the sailor's Tombstone and a hand-made souvenir purse from the Philippines.  There also is a medallion with the engraving; "USS DENVER XMAS 1944".  The "Master At Arms" badge appears to be either shipboard made or Philippines made.  It and the medallion may be  silver since they are not magnetic. 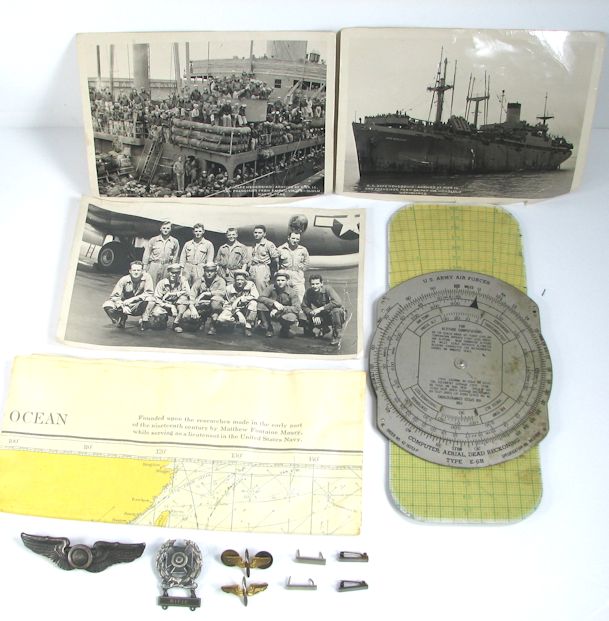 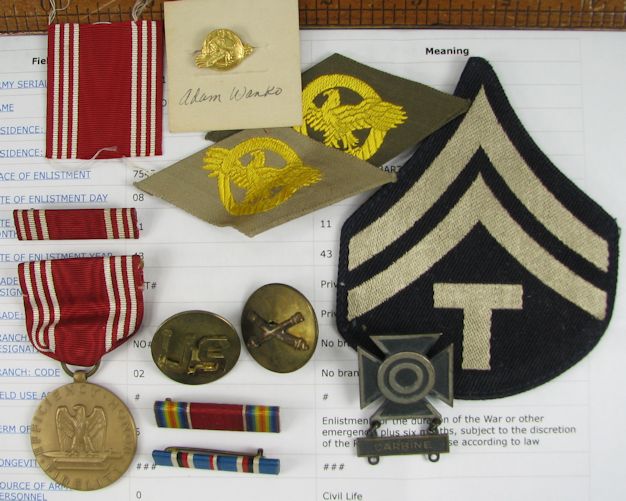 Click small images to enlarge --->
Item # 2121 $30.00
WW2 ITEMS OF ADAM WANKO:  There is a named Good Conduct Medal with ribbon bar and extra piece of ribbon. The medal is early slotted brooch type.  Unusual shaped Artillery Collar disks, more pointed than round dome. Sterling Qualification Badge. One rank patch and Honorable discharge lapel button and patches. Some research found his enlistment records (Nov. 1943) and his grave marker (Apr. 1950). He was only 29 years old. Cause of death unknown. More information in text on the images.